This original article, along with a series of pictures, appeared in the December 17th Edition of the Citizen News, serving Sherman and New Fairfield, Connecticut. 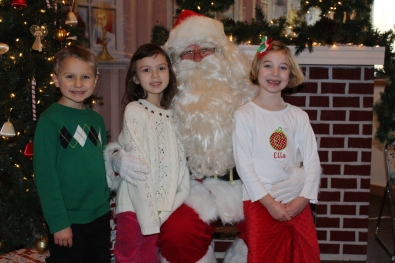 “Eyewitnesses” said that at precisely 9 a.m. on Saturday, just like clockwork, jolly old Saint Nicholas came to town for another festive visit to Holy Trinity Roman Catholic Church. One thing is for certain, Santa didn’t arrive by sleigh. As for how he got to Sherman in the first place, without his magical herd of reindeer, this remains a mystery. Just like in years past, the reliable Sherman volunteer firefighters brought Santa safely to the “Breakfast with Santa” celebration.

In the meantime, children of all ages with their families and friends, arrived earlier that morning and anxiously waited for Santa Claus to appear. The children knew he was arriving because the siren sound on the fire truck was easy to detect.  Minutes later, Engine #5 arrived at Holy Trinity and in walked Saint Nick! With a twinkle in his eye and a cheerful smile, the children welcomed Santa with wide-open arms. In Santa-style, he quickly made the rounds with each and every one of them. Somehow, he just knew the names of all the children.

Aside from the great-tasting pancakes, holiday goodies, and togetherness, some folks may wonder why Santa especially loves visiting the children at Holy Trinity year after year. It turns out that while the children believe in him, they also know what the “Spirit of Christmas” is all about.

Donna Dixon, who initially contacted Saint Nick, “at least 35 years ago” explained how it all began. “Eileen O’Connell, Gail Turro, and I once tried to get our children to see Santa when he was in the area visiting Danbury, and we couldn’t get them in,” Donna disclosed. Santa then became very upset because their children couldn’t see him.

Soon after, Donna, Eileen, and Gail came up with the “Breakfast with Santa” idea, and they also realized that Holy Trinity would be the perfect place to have it. Once the women got Old Saint Nick’s commitment, they needed several more volunteers and the Sherman Fire Department to make it happen. When Betty Breslin heard about this community event she, too, decided to join-in on the planning.

Next, they needed food donations. McDonald’s in New Milford, Stop & Shop of New Fairfield and New Milford, Big Y in New Milford; and in more recent years, Costco in Brookfield, all wanted to help make “Breakfast with Santa” possible. So, this is how it came to be that Santa would make an extra-special visit to Holy Trinity each year just so the children would always be able to see him.

It was also “revealed” that in keeping with tradition and in the “Spirit of Christmas”, Old Saint Nick is especially fond of everyday people that do good deeds. What he loves about “Breakfast with Santa” is that every year 100 percent of the money raised goes to help a family in need.

Story and Photo by Alicia Sakal.