NEW MILFORD – Bank Street Coffee House, a charming community meeting place that serves a variety of gourmet coffees and teas, along with light breakfast and lunch menu items, will be closing soon, and it’s not by choice. 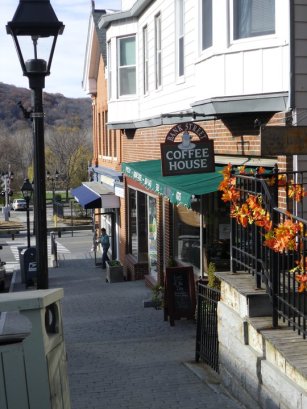 Andrew and Beverly Monthie, owners of the coffee house for six years at 56 Bank St. in the heart of the town’s historic district, said their landlord, MLST Investments, notified them last week to vacate the property by the end of the month and that their lease was up.

Andrew Monthie said they were taken by surprise and are heartbroken.

“The landlord walked into our coffee shop during normal business hours and said to my wife, ‘We’re shutting you down.’ We are current with our rent and didn’t know why this came up,” he said.

Monthie said he and his wife don’t have any issues with the landlord, and they respect MLST’s right to decide what happens with the property.

“Our sadness about all of this is how it’s impacting the people in our community, especially the loyal people who are here every day and our friends that we made through the years,” he said.

The co-owners hope to find a new location near where they are now, saying that is critical if their business is going to survive.

The coffee shop has been in business for more than 25 years and has a loyal, local draw at the Bank Street location. Open seven days a week, the business serves about 300 customers a day.

Andrew Monthie said most customers live within walking distance of the shop. For many, it’s where they come to congregate daily and socialize. From high school students to the elderly, they have customers of all ages and from all walks of life.

“We have really enjoyed serving the New Milford population and hope to continue the legacy of the business,” he said. “It’s a local destination where people share their lives with each other.”

“Our concern is for the people, and the location they have been coming to for several years has come to an end. That’s why we posted the notice on the building so that our loyal customers would be aware of what’s going on.”

Mayor David Gronbach is hoping for a resolution.

“I was very disturbed to hear about the announced closing of the Bank Street Coffee House,” he said. “I immediately spoke to (Beverly Monthie) and her tears made clear that this was not a voluntary decision.”

Gronbach called the business a downtown institution and said he has reached out to the landlord for more details.

The landlord couldn’t be reached for comment on Thursday.

Kevin Bielmeier, the town’s economic development director, said the coffee house has been a center focus of downtown for many years.

“No one wants to see them close their doors,” he said. “Unfortunately, I believe it reflects the systemic challenge facing downtowns everywhere – how to get more feet on Main Street.”

This news article by Alicia Sakal originally appeared online and in the Litchfield County section of the October 20, 2017 edition of Republican-American, a regional daily newspaper in 36 towns and cities in Litchfield County and Greater Waterbury, Connecticut.