NEW MILFORD – A husband and wife team with long ties to the hospitality industry is banking on nine generations of secret family recipes from the Deep South to draw diners to their new “southern flair” restaurant. Now open for business, they’re serving a light menu with plans to offer the full menu by next week. The bar is also open.

The 2,000-square-foot family-style restaurant, with seating for 65 guests in the dining room and 40 more guests in the bar area, is situated on the scenic Housatonic River and borders the towns of Gaylordsville, Kent and Sherman.

“They approached us with ambition and a dream of running a restaurant, and we gave them the opportunity to follow their dream,” Casmirio said.

Aside from adding some southern décor and finishing touches, the restaurant is turnkey. The Thompson’s signed a five-year lease with the option to buy six weeks ago. They plan to employ 15 workers.

“The combination of the American comfort food with southern flairs, as they call it, with a variety of live entertainment, including celebrity comics – not seen in New Milford – sounds like a recipe for success,” said Mayor David Gronbach. 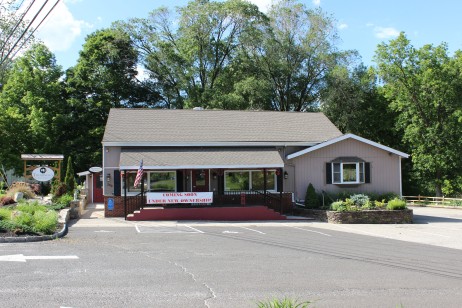 The Thompson’s concept of southern comfort food is new for this ranch-style restaurant that was once home to the popular River Café and River Bistro for several years, and for a short while was known as Bridges Tavern & Restaurant.

“Several of my original dishes are guaranteed to tempt the taste buds,” said David Thompson, who will be head chef.

His source of inspiration for preparing exotic, flavorful southern dishes began in childhood with his parents.

“Ever since I could remember, I was cooking with my mom and dad,” he said. “Although my mother was extra special in the kitchen, and she gave me a solid cooking foundation, it was my 81-year-old father who was extra special on the grill. My dad’s family roots can be traced back nine generations.”

His father was from Easley, S.C., and one of 12 children. In the extended family he became known as the barbecue master of southern cooking.

“My dad passed on his specialty to me, along with all of the secret recipes and rubs that I will not reveal,” he said.

Thompson, a Connecticut native who frequently visits his extended family down south, wants to be known for his “southern flairs.” He said the restaurant will source local, organic food as much as they are able.

Assisting him in the kitchen will be Assistant Chef Miguel Ortega and Sous Chef Vinny Meyer, who’s from Brazil.

Senka Thompson, who has been in hotel management for a decade working at hotels including The Peninsula and The London NYC in Manhattan, will run the front of the house.

Senka Thompson, who came from the war-torn part of Yugoslavia that’s now Bosnia, will create many of her favorite eastern European dishes. Goulash, stuffed peppers and stuffed cabbage will be some of the house specials.

The couple plans to experiment with the two very different styles of food and they may very well come up with some distinctly original dishes with “Yugoslavian flairs.”

Behind the bar David Thompson has plans for seasonal specials. “I’m also a mixologist and I enjoy making specialty drinks,” he said. “Our bar will be a highlight. I’m into a lot of flair drinks, like watermelons hollowed out with mixed drinks, goblets with mini Coronas and shooter sticks, and martinis of all sorts.”

Once the restaurant is up and running they’d like to offer catering and add smokers in the back and add a wrap-around porch so diners can overlook the Housatonic River. Future plans also call for nightlife and entertainment including celebrity comics, Thompson said.

“This restaurant has been Dave’s dream for a long time and it’s a perfect opportunity to fulfill our dream together and spend more time with our family,” Senka Thompson said. We feel absolutely blessed.”

WHAT’S ON THE MENU?

Article and photos by Alicia Sakal. This feature originally appeared online and on the Business front page of the June 10, 2017 edition of Republican-American, a regional daily newspaper in 36 towns and cities in Litchfield County and Greater Waterbury, Connecticut.

(Now out of business.)