Centers may be answer to severe doctor shortage in Connecticut.

Patients wanting immediate care – but without a need for a trip to the emergency room – have inspired what industry watchers predict will be an $18 billion industry nationwide by year’s end: the urgent care center.

In New Milford and Waterbury, two centers have opened within the month and Saint Mary’s Hospital has another planned to open this summer.

They’re popping up everywhere, from strip malls to office parks to standalone properties. The concept isn’t new, dating back to the 1970s, but urgent care clinics provide temporary fixes to a shortage of doctors and demand for quick-hit visits.

A shortage of doctors may be the underlying cause of patient demands for quicker attention, but their willingness to use these clinics is creating another branch of available health care.

“The business fills an important niche by expanding health care options for the entire region, not just the town,” said New Milford Mayor David Gronbach, who celebrated the opening of Beyond Urgent Care in his town.

Beyond Urgent Care opened a storefront at 141A Danbury Road in a building previously used by Goodwill. The 2,200-square-foot space inside Lore’s Plaza has four examination rooms, one treatment area, a laboratory and laboratory draw area, an x-ray room and a reception and waiting area. It’s open seven days a week offering x-rays, lab work, allergy testing, school and work physicals, flu shots and vaccinations and treatment of minor illnesses. Insurance is accepted, as are Husky and Medicare. The average cash price is $135.

“Our strategy will be to ensure that everyone in Greater Waterbury has access to Saint Mary’s urgent care services within 15 minutes of anywhere in our market,” Wable said.

Alissa DeJonge, vice president of research for the Connecticut Economic Resource Center, said that urgent care makes up about 29 percent of the health care industry in Connecticut, where there are 277 such centers.

Matthew Katz, chief executive officer and executive vice president of the Connecticut State Medical Society, said the main reason why the urgent care industry is in high-growth mode is because of Connecticut’s acute shortage of doctors.

Only 12.5 percent of the state’s need for primary care physicians was met last year, according to the U.S. Department of Health and Human Services.

“This shortage is only likely to get more significant and severe. We have a graying of our physician population and very few new physicians are willing to come to this state and be part of the care delivery system because of our medical practice climate,” Katz said.

Amara, a Connecticut native and graduate of the New York College of Osteopathic Medicine, has been a family doctor for 20 years. He’s also an enterprising businessman who sees the urgent care market in Connecticut as a “new frontier.”

Eighteen years earlier Amara saw this same opportunity in the Southeast, at a time when urgent care was expanding there rapidly. Amara, a former Army doctor, was stationed in Hilton Head, South Carolina. After retiring from active duty in 1999, he stayed there and opened a successful urgent care business. Seven years later, he sold it and moved back to Connecticut to be near family. Amara then worked several years as a staff physician for a private family medical practice and an urgent care company before branching off on his own again.

KERRY MERKEL OF SHERMAN TOOK her husband John to Beyond Urgent Care in New Milford last month. He had a “classic winter head cold that wouldn’t quit, and it was developing into a sinus infection,” she said.

Merkel couldn’t get into his regular doctor over the weekend so he was sent to urgent care.

“John was seen immediately,” Kerry Merkel said. The doctor confirmed a sinus infection, prescribed medicine and he was on his way. “We were in and out in less than 20 minutes,” she said. 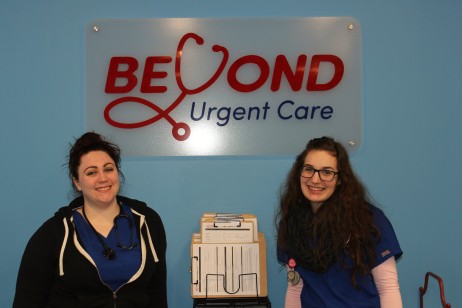 Beyond Urgent Care employs 30 people, 10 at each location. They treat about 20 to 30 patients every day at each clinic.

“The nursing field has ramped up education and training and these professionals can stand alone now,” said Amara. “They’re a great resource in health care and it’s very cost effective.”

Amara plans to expand north into Litchfield County to fill a void between New Milford and Litchfield. “It’s uncharted territory,” he said.

Amara said the Department of Public Health has made it easy to open an urgent care center.

“There’s no distinct anything for urgent care. It’s just like opening any other medical practice. If you have the right credentials – medical training as a physician and oversight as a medical director – it’s not that difficult to open a medical office within your scope of practice. It only requires a business license and you need a location and building that’s zoned for it.” he said.

Amara said Beyond Urgent Care wants to take the burden off emergency rooms and primary care physicians who are overwhelmed. Have a sinus infection? Don’t bother your regular doctor who may not able to squeeze you in, he said.

“We’re here to augment both,” he said. “The need for primary care is so great. It all comes down to access to care and life doesn’t stop.”

This article written by Alicia Sakal originally appeared online as premium content and on the front page in the March 18, 2017 edition of Republican-American, a regional daily newspaper in Connecticut. Photos: Alicia Sakal