NEW MILFORD – Known nationwide for serving up “made-to-order burgers with over 250,000 ways to customize your burger,” Five Guys Burgers & Fries will soon launch its first Litchfield County outlet on Route 7. 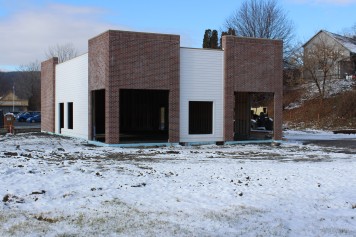 Five Guys, which already has 24 restaurants in the state and more than 1,400 worldwide, plans to open a 2,380-square-foot location in New Milford Plaza in the spring. The restaurant, at 164-168 Danbury Road, is planned for 66 seats in the dining room and 24 seats outside and will employ 25 workers.

“We are really excited about this new location because it’s our first entrance into this part of Connecticut,” said Lauren Lewis, spokeswoman for Lorton, Va.-based Five Guys Enterprises. “We’re happy we can bring Five Guys and fans to this area.”

In addition to burgers made with the freshest ingredients and hand-cut fries made in 100 percent peanut oil, the new restaurant will also serve a new menu addition – handspun milkshakes with free toppings, Lewis said.

Five Guys’ arrival shows that the town of about 28,000 people is growing and providing a “friendly environment for developers,” said Economic Development Director Kevin Bielmeier.

“The more our community provides a friendly environment for developers to enter in to, the more economic growth we will benefit from as a town,” he said. “I do want to explore ways in which these projects can be expedited faster.”

Central Pillar Group, a Cazenovia, N.Y.-based construction firm, began building Five Guys’ newest outlet a few months ago and poured the foundation and erected the walls by December, after two years of planning. The free-standing restaurant’s shell and site work should be finished this month and turned over to Five Guys in early February, according to Willing L. Biddle, president of Greenwich-based Urstadt Biddle Properties. 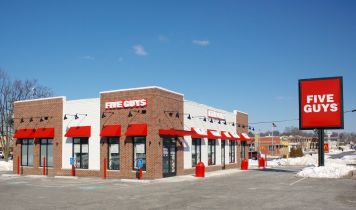 Five Guys’ internal construction team will then customize the interior with its distinctively retro 1950s design using clean lines and red-and-white checkerboard pattern, said Biddle, whose firm – a real estate investment trust – owns the plaza. The restaurant – which will also feature classic looking Coca-Cola “freestyle” machines and handspun milkshake machines – is expected to open in the plaza within four months after receiving a certificate of occupancy from the town’s building department, he said.

The restaurant will be located in front of Walmart – the plaza’s anchor store – and next to a Stop & Shop gas station. The 235,000-square-foot shopping center is also buoyed by a Stop & Shop Supermarket and home to a dozen other businesses, including Dollar Tree, Nails Studio, Cutting Crew, Club 24 Fitness, Bridge Liquors and Radio Shack.

Regarding future expansion plans for the region, Five Guys is keeping an eye out for new locations, she said.

“We’re always looking and reevaluating regions and there is no cap,” she said. 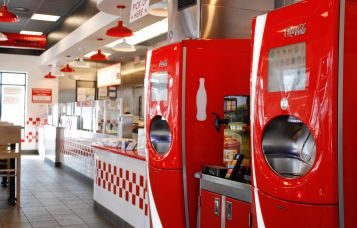 HELP WANTED: Five Guys recruits for management positions two months before a store opens and recruits for all other positions three weeks to one month before a grand opening. To apply for a job visit: www.fiveguys.com/Careers 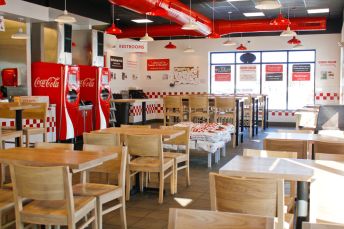 How it all began… In 1986, Jerry and Janie Murrell gave their sons an offer to “start a business or go to college.” The brothers chose to open their first carry-out burger joint in Arlington, Virginia. Today, there are over 1,400 restaurants in nine countries, and they’re still growing.

This article written by Alicia Sakal originally appeared online as premium content and on the front page of the Business section in the January 16, 2017 edition of Republican-American, a regional daily newspaper in Connecticut. Photos: Contributed; Construction Photo: Alicia Sakal